Tenerife is a magnificent volcanic island located within the Canary Island archipelago 100km off the coast of Africa. Expect an unforgettable week of impressive lava, coastal and mountain walks.

“…but having traversed the banks of the Orinoco, the Cordilleras of Peru, and the most beautiful valleys of Mexico, I own that I have never beheld a prospect more varied, more attractive, more harmonious in the distribution of the masses of verdure and rocks, than the western coast of Teneriffe.”
---Alexander von Humboldt, 1799, German naturalist and explorer

Do you feel like a winter getaway? Jose and Nancy have enjoyed traveling to Tenerife, part of the Canary Island archipelago, over the years as a family and a couple. We would love to share this spectacular island with you. We have created a unique tour designed to bring you into contact with the remarkable variety of landscapes on this special island that once was an essential stepping stone for all New World journeys and exploration of the Americas and beyond. Located 100km off the coast of Morocco, Tenerife enjoys a privileged climate making hiking and walking a pleasurable year round activity.

Tenerife rises out of the ocean and climbs to an impressive 3718m (12,198ft) at its summit, the volcano Mt. Teide, which dominates views of the island no matter where you are. Mt Teide is the highest volcano that rises out of the ocean floor outside of the Hawaiian islands. Jose and I have planned walks in the vast range of microclimates and landscapes including the steep, lush semi-tropical laurel forests of the Anaga Peninsula where the variety of flora make it a botanist’s paradise; the barren, lunar landscapes encircling the base of Mt Teide remarkable for their colors and habitats where the toughest flora and fauna eke out an existence; coastal walks through black volcanic "aa" (malpais in Spanish) rock and flower-laden, cliff paths that give stunning views to the azure waters below. We will also enter the great volcano’s innards and become cavers for an afternoon as we explore the famed Cueva del Viento (Cave of the Wind).

As always Nancy and Jose will weave the history of the island into our walks to understand the aboriginal inhabitants of the islands (the "Guanches"), their conquest at the hands of the Spanish on path to the new world and the remarkable economy of wine and sugar that resulted from the conquest. We will also enjoy the unique Canarian cuisine and their wines which once were the pride of European tables and referenced by Shakespeare himself. Due to Tenerife's unique conditions, the national park around Teide contains one of the world's most important astronomical observation centers. As part of the tour we will explore the heavens from our privileged vantage point with a local expert. January in Tenerife, depending on where you are on the island, can have highly varying temperatures. We will also be going, over the course of the week, from sea level to the summit of Teide (mostly via cable car!). In January it often snows on Teide but at the coast you can be in shorts and swimming in the ocean. Consequently, it's a fun tour with great variety in which you'll want to prepare for several seasons. 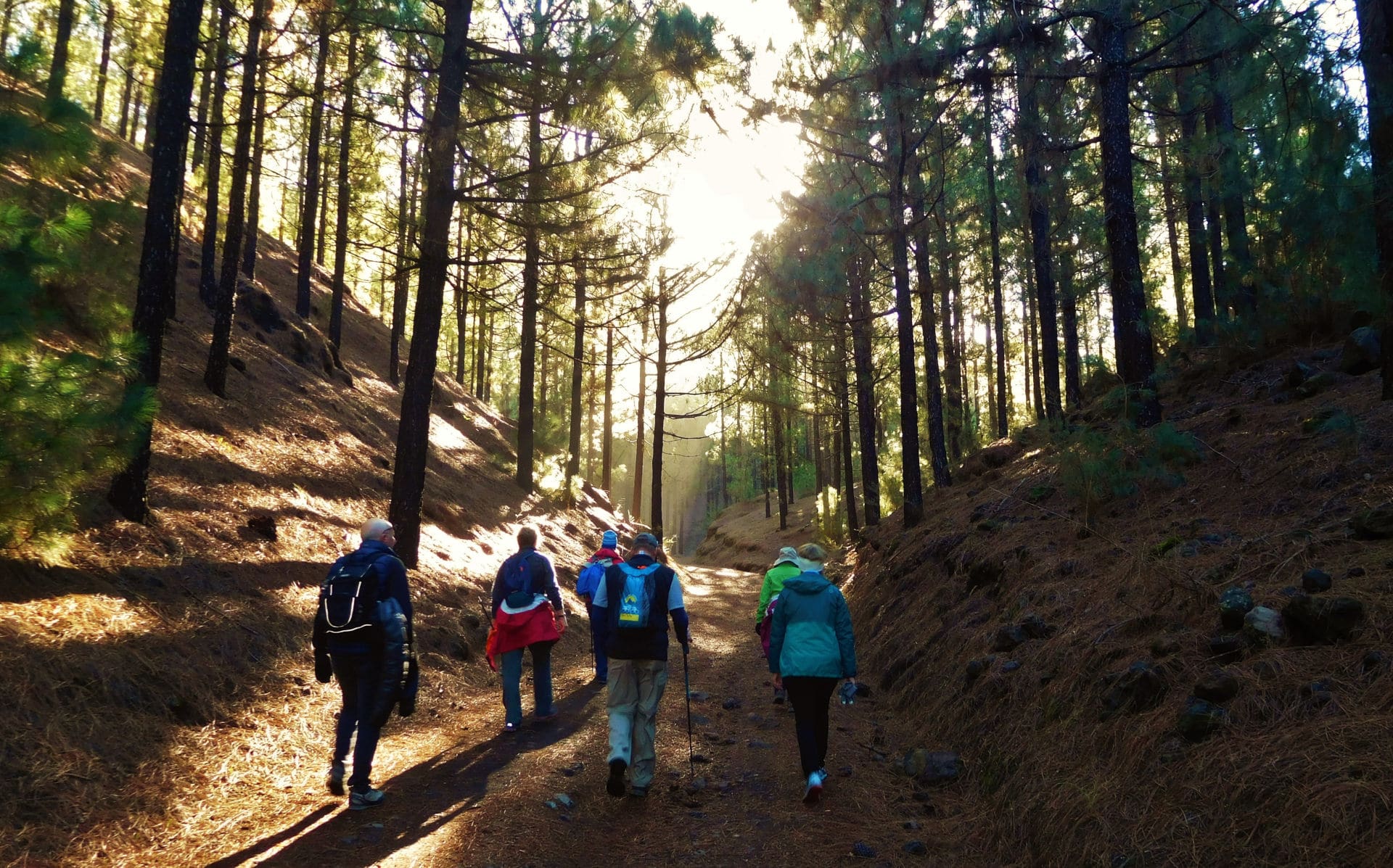 Walking Level: Medium to Medium Hard. We have tried to select walks suitable for a medium level ability but it is important to keep in mind that the island is volcanic which makes for steep, irregular landscapes that will require stamina, stability, confidence on uneven terrain and, on one walk, control of vertigo. We will be walking between 3km and 11km (1.8mi to 6.8mi) on a daily basis Walking poles are highly recommended for this tour.

Group Size: For sustainability purposes the tour is limited to 7 participants.

Tour Dates: This tour will not be offered in 2023. Please send inquiries for 2024 and requests for private group trips to info@onfootinspain.com

What is and isn’t included: Trip price includes accommodations (double occupancy), all meals (breakfast, lunch and dinner) each day except 2 dinners (Days 3 & 5), pre-departure information, all transportation during the trip, entrance fees to museums and activities as designated in the itinerary is included and Jose and Nancy will accompany the group.

Tour does not include: Airfare to Spain or Tenerife is not included nor is required health/travel insurance or transportation to and from the starting and end point (San Cristobal de la Laguna, Tenerife, Spain). Personal amenities such as drinks and snacks at end of walks or in free time are not included.

We’ll meet at our hotel in the town of San Cristobál de la Laguna located 10 minutes from the Tenerife Norte Airport. After our orientation we’ll shuttle east to the coastal loop walk of the Malpaís de Güimar and get our first exposure to different types of lava including “malpaís” or “aa” for its rough, irregular surfaces as we ascend the Montaña de Mar and loop around the Montaña Grande, two young (10,000 year old) volcanoes. We will also enjoy the rich flora that ekes out an existence in these harsh yet beautiful habitats. We return to La Laguna for dinner enjoying Canarian cuisine. (6.2km/3.8mi)

The day starts with a guided visit of the beautiful colonial town founded by the Spanish when they conquered the Canary Islands and Tenerife at the end of the 15th C. Designed on a grid-plan La Laguna (550m) became the model for future colonial architecture in the New World and became an UNESCO World Heritage City in 1999. (1km/.6mi). We then shuttle to the Anaga Natural Park and we will hike from Cruz de Carmen (1018m) to Chinamada (663m) descending through the special laurisilva (laurel forest) characteristic of the lush, humid sub-tropical climate of the northern part of the island.(6.6km/4.2mi) In Chinamada we’ll have lunch at one of the cave houses and then shuttle to the Casa del Vino (House of Wine) in El Sauzal. The Spaniards brought wine culture to the Canary Islands and became major producers and exporters of wine to European tables and the New World. The islands still have a strong wine tradition and we will enjoy the history and a tasting on this visit. We spend the next two nights in the lovely town of La Orotava. Tonight we’ll have dinner together here in a local restaurant.

La OrotavaIn the morning we’ll shuttle to the hamlet of Afur (270m) also in the Anaga Peninsula.
Today we do a spectacular, yet hard, hike from Afur down to the Tamadiste beach and then to the village of Taganana. From Afur we descend a beautiful, fragrant canyon full of native plants (cacti, flowering plants, wildflowers) to the beach. We enjoy the beautiful views of the dramatic coastline at Tamadiste and then make a steep ascent back to the cliffs and then progressively ascend along the high cliffs (342m) and then drops into the village of Taganana (226m) affording constant stunning views of the coast. The old terraced vineyards surprise for their location and variety. (7.9km/4.9mi) In Taganana we’ll have lunch at Canarian restaurant and then shuttle back to La Orotava. In La Orotava we’ll visit The Teide National Park visitor center. Afterwards you’ll have free time to explore La Orotava on your own and to have dinner.

Santiago del TeideAfter breakfast we shuttle down to Puerto de la Cruz where we’ll do a lovely cliff-walk to the Mirador de San Pedro (172m). This paved walkway connects two points along the coast weaving in and out of small settlements and seeking always to give you stunning views of the coast and the pounding deep blue sea below. The walk ends in an original Canarian palm grove surrounded by banana plantations. (4.1km/2.5mi) After our walk and a refreshment, we’ll shuttle to the spectacular Cueva del Viento (Cave of the Wind) to learn about the volcanic island from the inside. On the visit we’ll become cavers and wear special equipment to descend into the bowels of the earth and this large lava tube. (1km/.6mi) After lunch we’ll visit the coastal town of Garachico, once the major port in the north, but whose fate changed when a volcanic lava flow destroyed part of the town and its port in 1706. Shuttle to the high small town, Santiago del Teide (1000m), and the hotel where we’ll spend two nights.

Santiago del TeideFrom the hotel we’ll shuttle to our trailhead that starts at the small agricultural town of San Jose de los Llanos. This wonderful loop hike combines a very interesting array of landscapes from the cultivated fields outside of San Jose de los Llanos, to the lapilli (small lava stone gravel) paths within the peaceful Canarian Pine forest and then opens up to the black ‘aa’ (malpaís) lava flows of the 1909 Chinyero eruption, the last one to trouble Tenerife. Meanwhile we get great views of Teide imposing above it all before we loop back through the forest and the fields to San Jose. (10.7km/8.2mi) We’ll have our picnic at the end of the walk and the return to the hotel where you have the option to have a free afternoon or take a boating excursion to see the famed Gigantes cliffs and hopefully spot the whales and dolphins that thrive in the waters around the Canary Islands. The waters off the southwest corner of Tenerife are an internationally well-known cetacean observation area.

Parador de las CañadasFrom Santiago de Teide we shuttle to the Teide National Park and the lower cable car (teleférico) station (2356m/7729ft).*** The cable car will whisk us up to the station (3555m/11663ft) near the top of the Teide Peak crater (3718m/12198ft). According to Guanche beliefs, Guayota, the god of evil and darkness inhabited Teide, one of the gateways to hell and the underworld. We will we ascend to the crater as well as Pico Viejo. (2.8km/1.7mi). After we return back down by cable car we’ll shuttle to the Parador located at the foot of Teide and set in the midst of this high, open and desolate lunar landscape. Today we’ll dine in the Parador and then enjoy a look at the heavens with a local expert from this privileged viewing area. Tenerife’s unique conditions as an island with relatively little light pollution and a latitude favorable for seeing much of the visible sky, has made it a mecca for astronomers and has important international observatories.

After breakfast we’ll walk from the Parador to the wonderful Roques de García (2160m/7086ft) rock formations on a loop walk through the native flora and volcanic rocks which then steeply descends through different types of lava as we encircle these monumental formations left behind after eons of erosion wore down the softer surrounding rocks. (4.3km/2.7mi) Shuttle to the Montaña Blanca to see the lunar landscapes and white lapilli lava stones. We leave behind the lunar landscapes of highland Tenerife and descend back through corona forestal (belt of dense pine woodland) to La Laguna. We’ll have our farewell dinner in La Laguna and spend the night there. 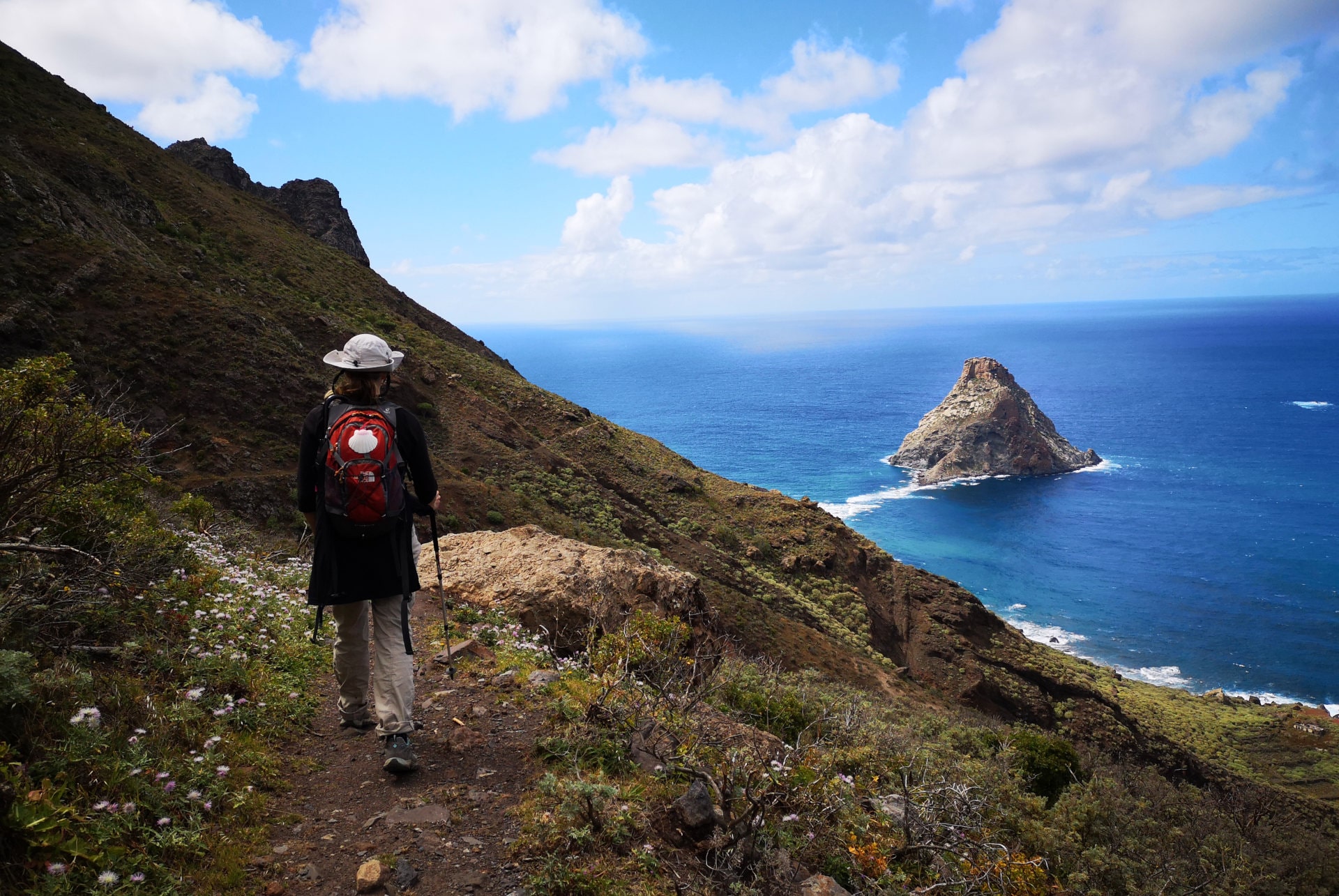