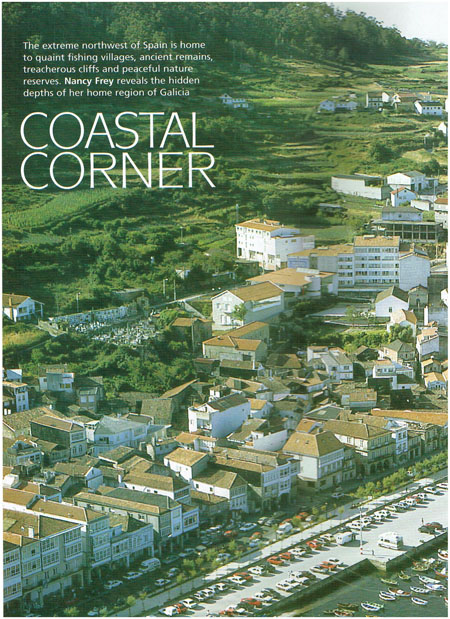 In the June 2004 issue (No. 5, pp 16-26) of the English lifestyle and property magazine Spanish Magazine, Nancy published the following article about living in Galicia. The magazine is now out of print and so we are making the article available here. I was asked to describe the region as a non-native resident as well as provide hints to prospective residents (thus the focus on the housing industry and property market at the end). At the time we lived in the small fishing village of Aguiño (Ribeira, A Coruña) at the very tip of the Ría de Arousa.

Here is a scan of the original magazine article. To make it easier to read, I’ve included a printable version of the text at the end. When I received the magazine with my article, I got a huge surprise when I discovered that the editorial staff at Spanish Magazine had not used my carefully written photo descriptions and instead had made up there own! Thus there is at least one grevious error: On page 24, on the left hand side, there are three small photos of Galician architectural elements. The top and the bottom are stone houses and the third, in the middle, is an horreo – the typical Galician corn cribs that are elevated on stone pillars and rectangular to prevent the dried corn from going bad and getting eaten by rodents. The photo description says:

Typical stone built gallego houses, some of the most rustic being built on stilts.

The description implies that this corn crib is a dwelling! Galicia does have rustic charm but that’s taking it a bit too far! Boy, was that embarrassing! Unfortunately, the magazine never rectified their mistake nor offered an explanation. By the way, the beautiful photos all came from Galicia’s tourism agency – TurGalicia (also not credited by the magazine much to my chagrin!).

Enjoy the article and come visit us some time here!

Twitter
Tagged under
More in this category: « Food Notes: Pear & Plum Jam with Port and Mint Food Notes: Apple & Fig Jam with Cinnamon and Drambuie »
back to top
Galicia: Sea to Mountain Hiking

Via de la Plata: The Camino from Sevilla to Santiago de Compostela