Part I of our story covers the early years of On Foot in Spain’s family story and Part II gets into the logistics of how we made it happen and what the kids do on trips.

The backpack, the stroller and the bicycle

Often people ask – “Do they walk the whole thing?” Typically, in our division of labor, Jose organizes everything behind the scenes making sure things runs smoothly and I walk with the clients on the trail and explain the sites as we go. When one of our children joins us they typically become Jose’s helper and “right hand man/woman”. Consequently, normally our child will be with Jose organizing and I’ll be walking though as they got older they would also walk on their own with me and/or the clients. In the two photos below, you can see Marina walking with a client in 2012 and Sam taking a photo along the Camino with another client as they walked along (thank you, France, for this nice shot!). 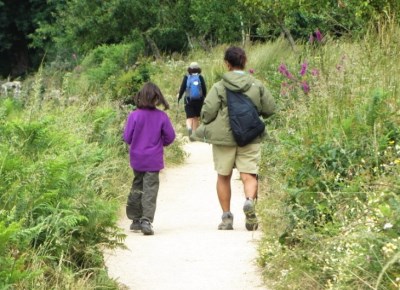 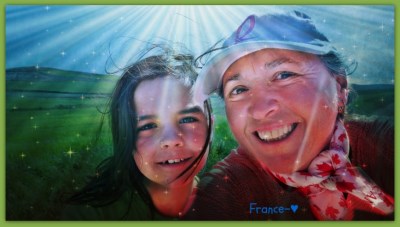 On some of the tours there are sections that allow Jose to walk and if we are with one of the children they have been able to come with us when they were little in a backpack, when a bit bigger in a stroller, walking on their own or even on bicycle from time to time on the Meseta. We believe that Jose lost 3 or 4cm of height due to carrying the children over the years many, many kilometers in the backpack! Here is Jose carrying Marina on the left in 2004 and carrying Sam in 2007 (right). 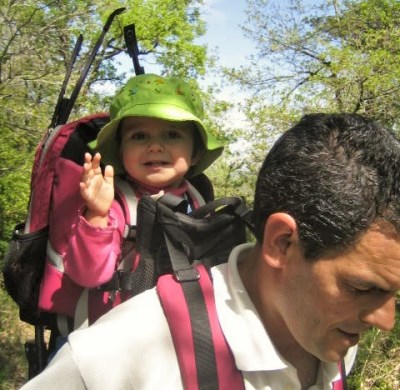 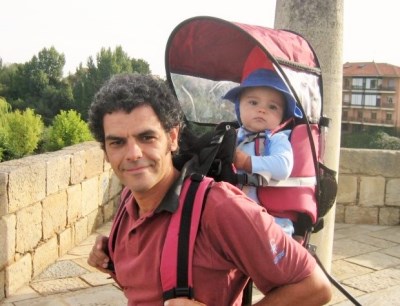 The stroller was worth its weight in gold, now long retired, and enjoyed many trips down the Camino with each of the kids. Often we would come up with funny ways to keep the hot sun off the kids with clothes pins, light blankets and, when those failed, small branches with large leaves. On the left you can barely make out Marina under the ferns in the stroller along the Camino in 2005. On the right, someone took this nice photo of Jose and me walking into San Juan de Ortega pushing the stroller in 2008. 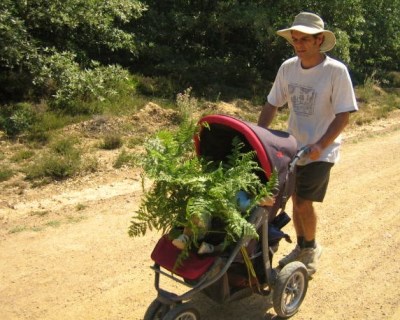 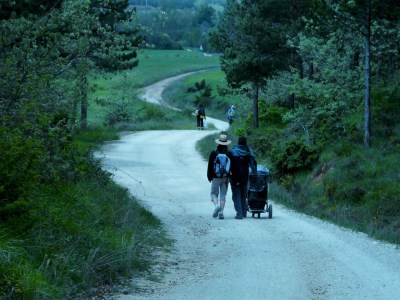 It makes me smile thinking of Sam sailing down the hill on his little bike on the Meseta outside of Hornillos del Camino. Here are a couple of photos of him on the Camino in 2013. 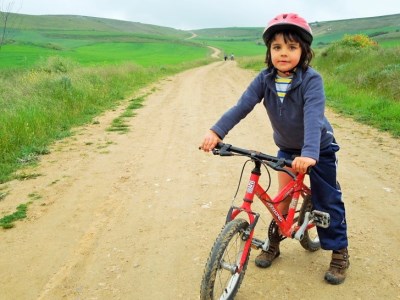 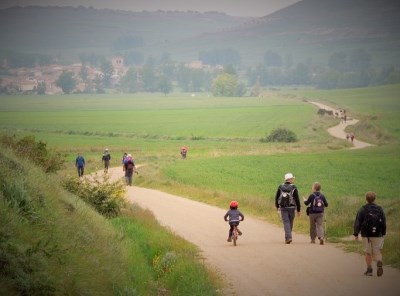 What the kids do on a tour

Depending on their ages and interests the kids normally spend a lot of time on tour helping Jose organize, prepare picnics, shop and/or interact with clients. Since the days are long, the children typically do not attend dinner and instead have some kind of culinary adventure with Jose as the clients and I head off to a restaurant meal. Each day we pass out maps to the clients and review the section to be walked. When one of our children is on tour they take over the role of passing out maps, helping clients stamp their Pilgrim’s Credentials, find the yellow arrows and sometimes pass out chocolate or fruit to happy and tired walkers. On the left Jacob stamps the credential for one of our pilgrims in 2005 and Sam passes out dark chocolate with almonds on the bus in 2013. 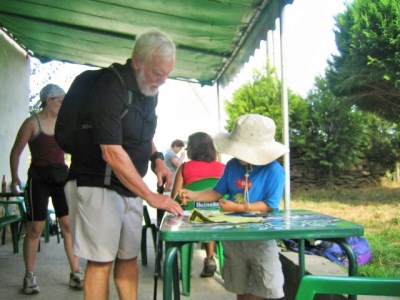 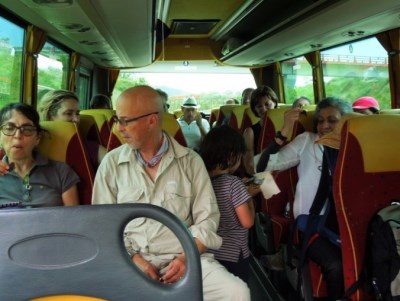 A very important role the children take on during our tours along the Camino de Santiago is to give a scallop shell to each client as they begin their journey along the Camino. Somehow receiving your scallop shell from a little hand takes on special meaning; especially knowing that that same hand may have picked up that shell back home in Galicia months before. The scallop shell is a beautiful symbol of rebirth, regeneration and fundamental to the Santiago pilgrimage experience. One of our vital On Foot activities, that does not take place on tour, is collecting scallop shells for our journeys along the Camino. Beachcombing for scallop shells that will be become part of our tours is a cherished family activity. Please follow this link (https://www.onfootinspain.com/tours/learning/articles/beachcombing-scallop-shells) to read about our beachcombing for scallops on the Galicia coast. On the left Marina passes out shells in 2008 at Roncesvalles and Sam does the same in 2013. 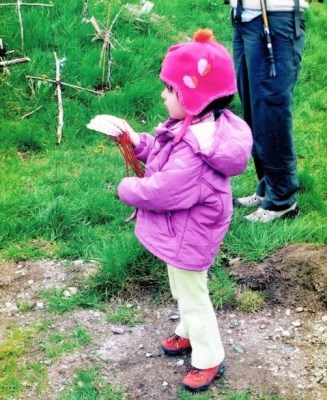 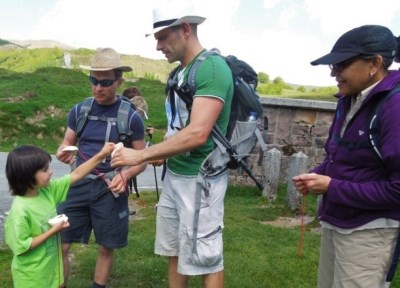 Sometimes Jose walks backwards from the meeting point to meet clients. He is always a welcome site, especially when joined by one of the kids whose energy usually inspires the walking the last few hundred meters. When we are on the Meseta one of the memorable sights are the huge stacks of rectangular hay bales that lay off to the side of the Camino. Normally, pilgrims don’t climb these but it’s one of Jose’s favorite things to do when he is accompanied by one of the children. Seeing Jose and Sam, Marina or Jacob waving down from the high haystacks greeting pilgrims is a memory that often sticks in our clients’ minds. On the left, Jose and Sam are visible atop a huge stack of bales on the Meseta in 2013 and 10 years earlier (2003) you can see Jacob and Jose pushing a huge bale across the wheat stubble. 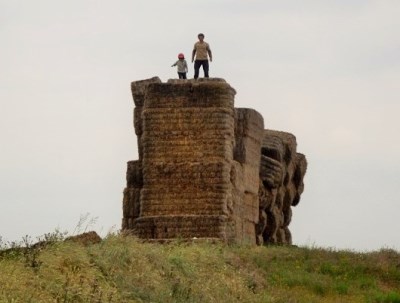 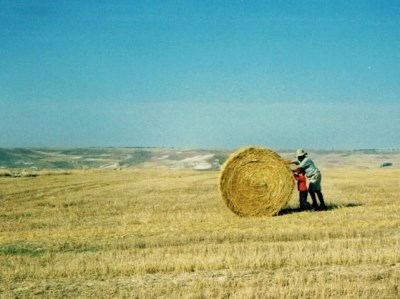 As the kids mature they generally want to walk with the clients, chat and interact. It’s been lovely to observe the unexpected bonds that have developed sometimes between clients and one of our children that neither part expects. Sam has a particular fondness for older women (‘grandmas’) and from a very early age would be very attentive – buttoning a forgotten button, rolling up or down a sleeve, holding hands or remembering forgotten walking sticks. He has been called on occasion an ‘old soul’. He has also learned how to converse with adults quite adeptly. He normally puts them through a series of questions – asking questions that he was often asked first by adults – favorite color, animal or book. Consequently, he would often ask his walking companions: “How old are you?” a typical question he was asked. As age can be a sensitive subject, I would overhear conversations and start to cringe thinking – ut oh, where is this going? With some trepidation, I might here an answer such as “72”, “58” or “75” and Sam, the sharp fellow that he is, would immediately respond, “ Oh, that’s not old. 90 is old!” The laugh, relief and gratitude of the client was quick and spontaneous. Sam was never coached. He just somehow knows how to be with people and make them feel good. Here is Sam helping explain the picnic to Ann in 2014. 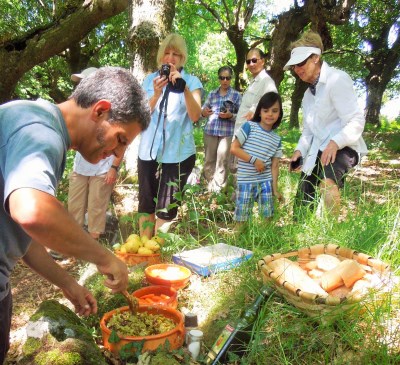 Marina has enjoyed meeting people from around the world and practicing her English like she did with Allison along the Camino in July 2012 (left). Sam and Annette have become pen pals after coinciding on several trips together. Here they are on the Camino Portuguese together in 2016 (right). 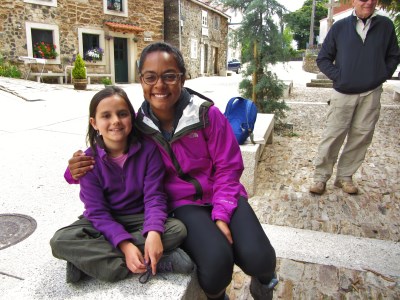 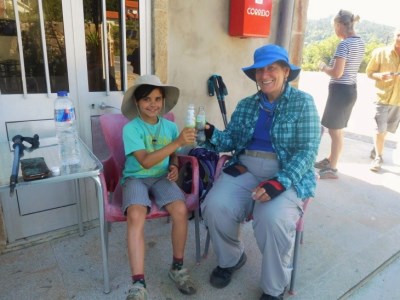 In 2017 we had a client with us who had traveled with Sam on the same trip along the Camino in 2014. Due to school obligations, Sam was unable to go on this trip and the client conveyed to me how special his presence had been (something I hadn’t known previously). On the tour we reached a small chapel in the middle of nowhere and the client stopped and looked at me with a smile and said, “I remember this place.” He described how Sam joyfully appeared, did the splits on the open-air altar and then helped pass out melon as I began to tell the story of the site. When I was going through the thousands of photos that I have collected over the years, I was tickled to find a photo of Sam doing the same splits on the altar the client was referring to in the anecdote above (June 2014). 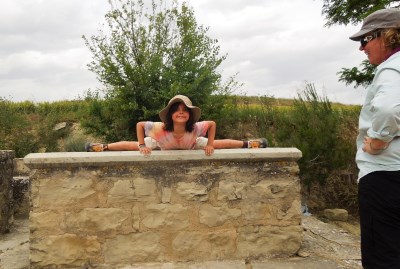 On the right, the group has stopped to see a slow worm that Sam has found as they hike up to Cebreiro in 2012. By the way, a slow worm is neither slow nor a worm. It’s actually a totally inoffensive legless lizard that slithers along like a snake and sometimes has vestigial forelegs. 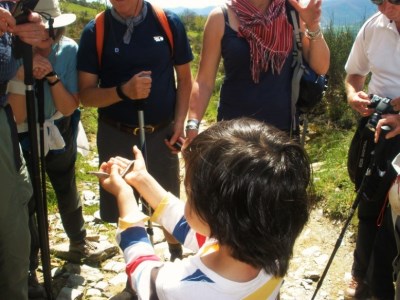 As our children have matured their roles have also evolved. Jacob has accompanied Jose on a number of private trips, accompanying the groups, explaining sites, helping him prepare all parts of the trip behind the scenes and been a great companion. When Jacob was 15 he joined Jose to help him with a private, youth group that was walking the last 100Km to Compostela. Afterwards the organizer wrote (who had also traveled with Marina when she was a baby):

“I just have to tell you what a special young man Jacob is (although I am sure that you already know that). He worked really hard to be a good guide and he was, but he also became one of us as the week went on and we all fell in love with him. Our guys thought the world of him and consider him now a friend and he holds a very special place in my husband’s heart.” Sarah

As a mother, being able to combine work and family means the world to me. I like this photo of me and Jacob (2005) and the rapport that we have as we connect and share some thought or idea while enjoying Jose’s picnic. Jacob always had a skill of conversing with adults on a wide range of topics (history, politics, science) from an early age. In the photo on the right, he chats with the group below the Cabo Vilano lighthouse on the Galicia hiking tour in 2005. 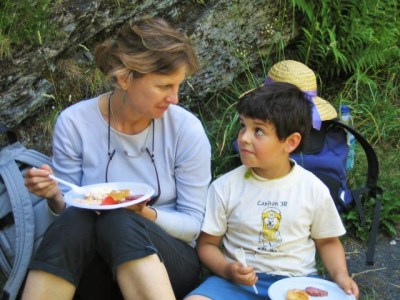 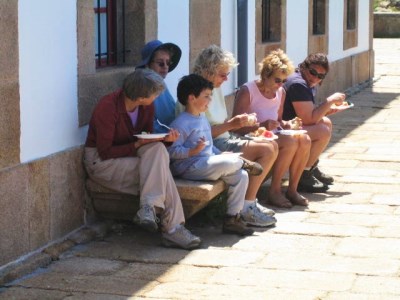 To read about some Camino Miracles, go to On Foot Family, Part III.